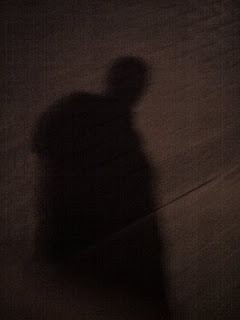 It never seizes to amaze me how criminals and shady people in general continue to make themselves standout. It is almost as though the more suspicious a person is, the more obvious they appear. Would it kill them to cut their hair, pick up their pants, and put on a polo when hanging around a nice neighborhood?

Today as I took my afternoon walk around our block, I noticed a young Caucasian male, with long hair, baggy pants, and a ratty white t-shirt enter our greenbelt. Which is private property, by the way. He was smoking a cigarette and walked toward one of the benches. As I walked away from him, I made a mental note of what he was wearing. When I got further away, I called John to ask him if the guy was still sitting there. He said he was. I told John I would have him open the front door for me when I finished my walk, so as to not run into this stranger from the back of the house. Half of me thought the guy would have been gone by now..

When I finished my walk, I went to my back door to see if the guy was still sitting on the bench. And he was! By this time it had been 45 minutes. I looked around for a neighborhood watch telephone number and was unsuccessful. John suggested we call the non-emergency phone line to the Bedford police.

I told the dispatcher who answered the situation and had her send an officer to our greenbelt behind our backyard. Within a few minutes, a Bedford Police SUV drove by. The two officers stepped out of their vehicle, walked over to the suspect, and asked to see his identification.

Needless to say, the man is no longer sitting on that bench.

If you act shady, people will treat you shady. That man had no right loitering on our greenbelt.

Thank you Bedford Police! Your response time was nearly immediate :)
Posted by The Mouse at 8:33 PM